The description of the technology

Die-casting is the most common method of plastic parts making. This method is technological, well-automated, it provides high efficiency and does not require subsequent machining. Materials used in die-casting are thermoplastic and have a wide range of physical and chemical features, they are easily recyclable. The raw material for press mould making is thermoplastic polymer granules. Before production the granules are dried to remove excess moisture, and then poured into the receiving hopper of the thermoplastic machine. From there the plastic is poured directly into the auger of the machine, where it becomes melted and, under the action of a piston, is fed into the press mould under high pressure.

The melt passes through the gating channels and fills the press mould at high speed, after that the press mould cools and the material solidifies forming a plastic part. The press mould opens, the plastic part drops out, and the cycle repeats again. At the Smolensk PPP there are established relationships with suppliers of polymer raw materials from well-known foreign and domestic manufacturers that provides our customers with favourable prices. 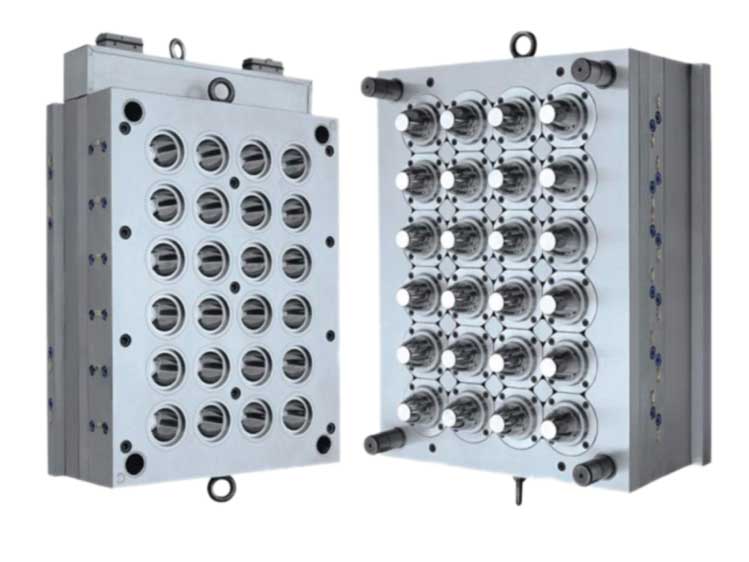 The Smolensk PPP provides services for the fulfillment of orders of the plastic parts die-casting using its equipment, but the using of the customer’s press moulds is also available.  We make products using both private and tolling raw materials.  The specialists of the Smolensk PPP have extensive experience in working with various materials of general and specific use.  We give consultations on press mould manufacturing, provide support services of press mould manufacturing from outside contractors.

The production is equipped with high-capacity electric thermoplastic machine (TPM) belonged to Japanese production of the latest generation.  The thermoplastic machines have a maximum injection weight of up to 0.5 kg, clamping force from 130 to 280 tons. A full range of auxiliary equipment is available at the Smolensk PPP: dryers, loaders, chillers, crushers for product processing.

The proper organization of the technological process makes it possible to shorten the manufacturing cycle of one workpiece and to produce both industrial consignments with increased quality demands and household products for the consumer needs.

For servicing and minor repairs of press moulds there is a well-organized locksmith area that is fully equipped with the necessary equipment and tools.

At the Customer’s request we can provide additional services of assembly, equipment, painting with masterbatches, pigments and subsequent packaging of our products.

The organization of our casting production gives us reason to guarantee the fulfillment of orders at a reasonable minimum period.

We look forward to cooperating, we are ready to open new projects together and make the complex ideas true!

The cost of a casting product consists of five main indicators: